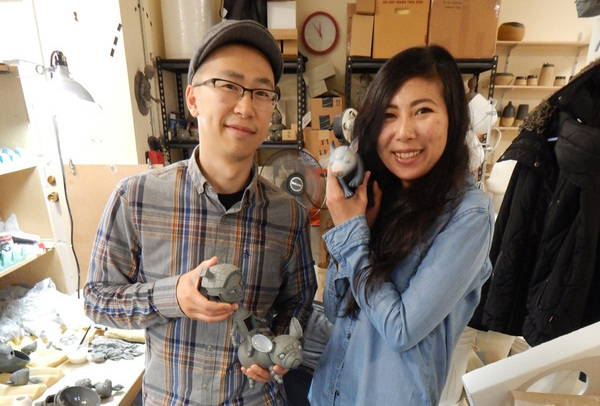 Ahead of their two-person show at Antler, our good friend and incredible artist John Casey visited the studio of ceramic artists Erika Sanada and Calvin Ma to find out a little about the stories behind their work.

On a recent sunny San Francisco afternoon, I headed over to Red Brick Studios located in San Francisco’s Mission district to catch up with two very talented artists, Erika Sanada and Calvin Ma. In the large studio shared by a number of artists who work in clay, Erika and Calvin have carved out a small but energetic work space where they sculpt their signature characters. The cozy energy of their work zone, nestled amongst the kilns and shelves filled with clay objects of resident artists, reflects the intimate narrative nature of both artists’ work. We talked about their work for their upcoming 2-person show at Antler Gallery in Portland. We also discussed the modern affliction that both artists deal with personally, anxiety, and how they confront and channel it in their work. 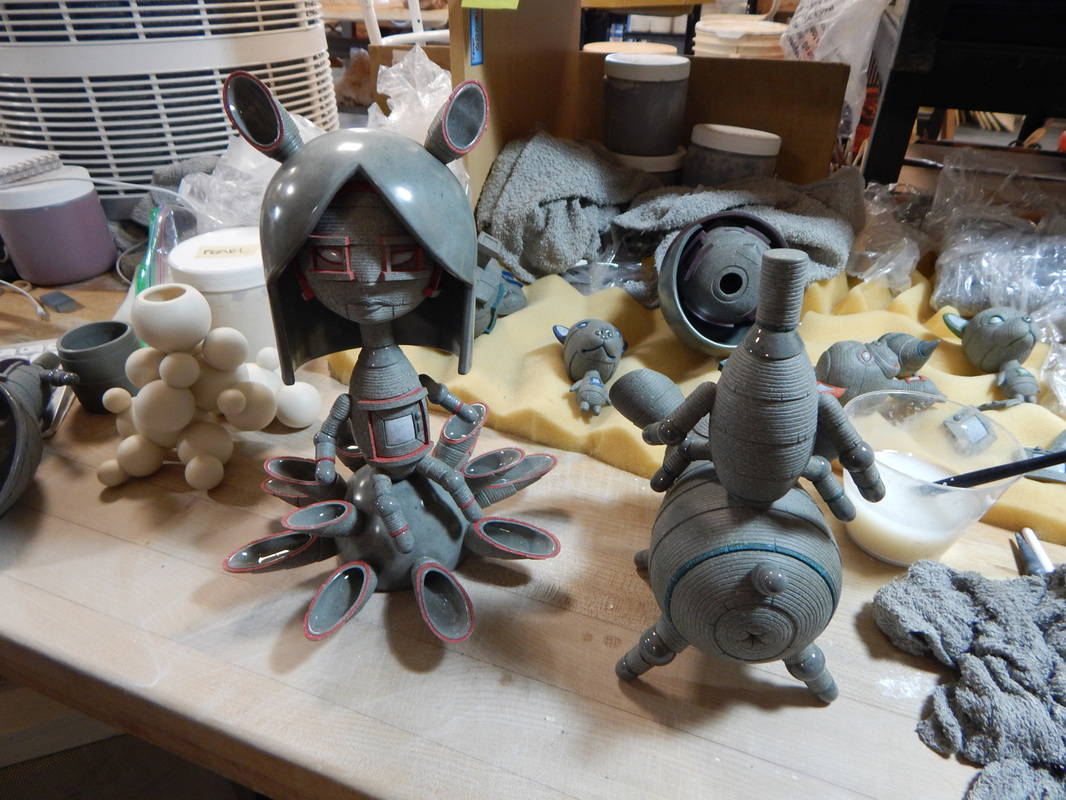 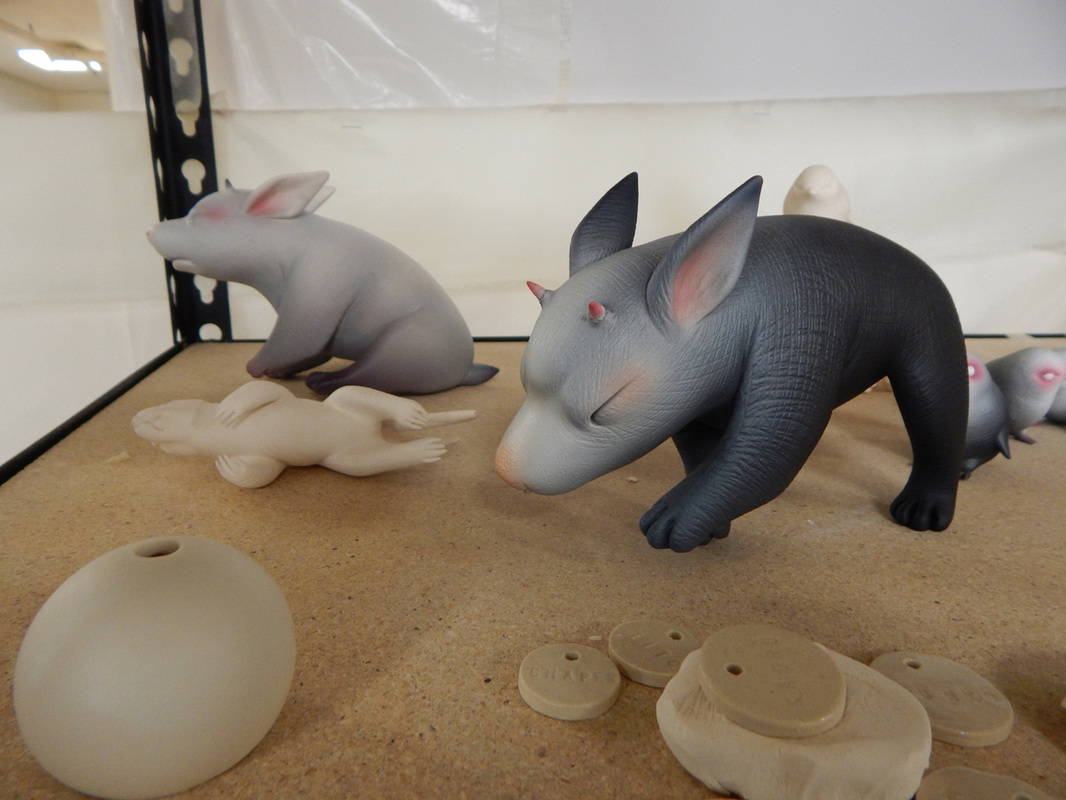 I ask Erika about the central animal character in her work, a dog, who at times seems light and playful and at other times more dark and menacing. Erika tells of being bullied as a child by other kids which resulted in her daily struggle with anxiety. To help her with that, her parents got her a Jack Russell terrier who became her best friend. The reference in her work to the terrier also represents Erika herself. The dog conveys her dealings with her daily anxiety as and adult, tipping from light to dark, a dichotomy that probably leans more toward the dark than the light. Such is the struggle with anxiety. Other characters inhabit Erika’s sculptural world, birds, rats, and moths, all representing different elements of the artist’s psyche. All of them have an unnatural distortion of the anatomy, some with odd appendages, some with extra eyes, and all of her characters are rendered in a decisive and limited color palette. This gives the choice of color even more significance. All of the characters’ eyes are absent pupils and iris, giving them a spooky, otherworldly vibe. This creepy quality is done subtly and give the beings a kind of mystical power. 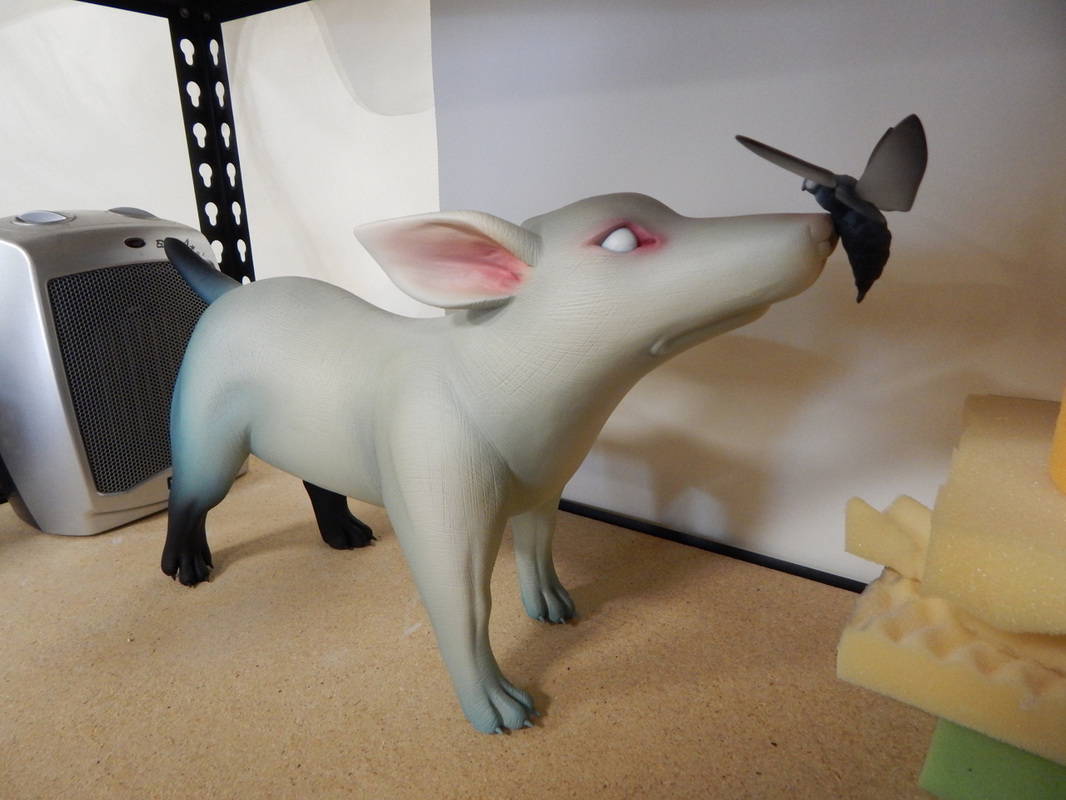 Calvin Ma also struggles with anxiety, but he tells me his outlet as a child was his escape into the fantasy world of action figures. What better way to resolve internal turmoil than to play out various narratives with toys. You can certainly see this toy influence in Calvin’s work. Each of his figures are robot-like with what appear to be ball-joint arms and legs. It’s hard to believe these objects are made of clay. But the advantage of clay is that Calvin can choose the surface texture and color as the work is being created. Much of his work appears to be made of wood, sort of organic “wicker-man” cyborgs. Calvin describes this wooden skin as armor. So not robots exactly, but living beings. Wooden armor suggests, at least to me, protection against the anxiety-inducing outside world. Protection, but with a porous and natural armor, allowing the possibility of interaction with the world, a desire to connect. For his work at Antler, Calvin has introduced some animal characters as well as humanoid. Perhaps an influence from Erika’s critters? Both artist’s live and work together so informing each other’s work is inevitable.

To find out about more about their works and upcoming shows please email gallerist@antlerpdx.com 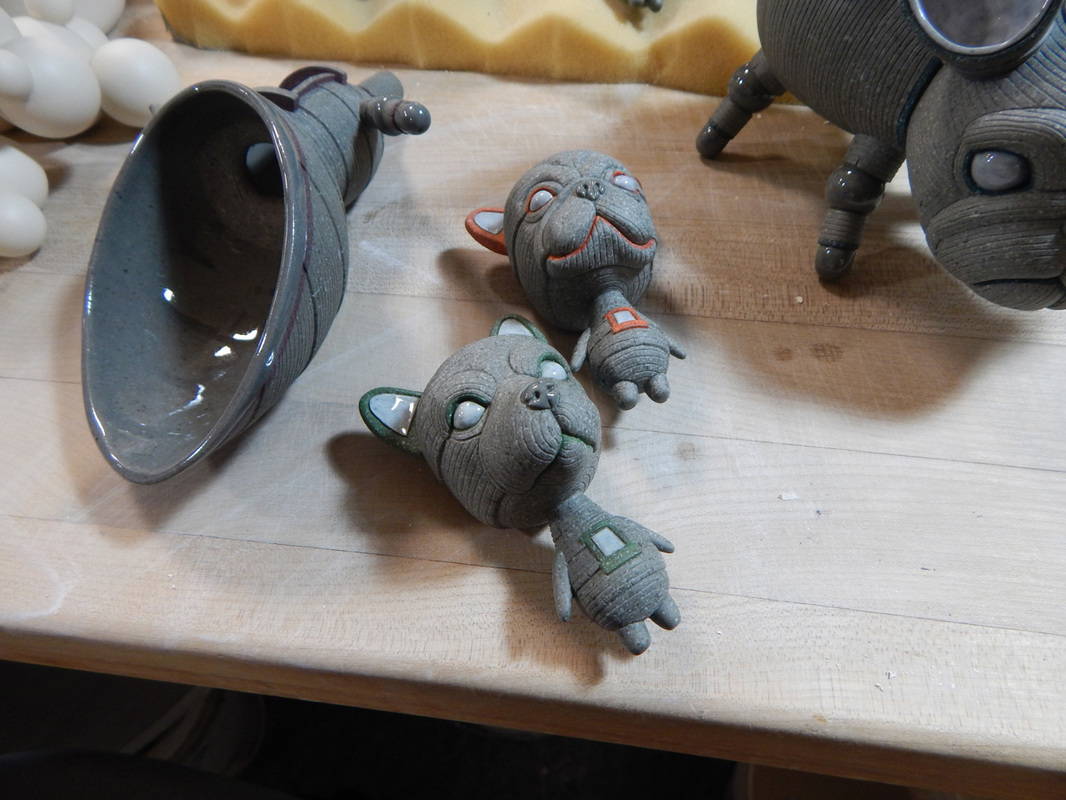