Antler Gallery is thrilled to share with you Intricacies, a collaborative body of work from Christina Mrozik and Zoe Keller.

The pair had only met once in person before deciding to live together while working on this incredible project, which would become their first self-published book and is now being presented as a series of original drawings.

They worked tirelessly over several months to first complete the works which make up the book’s content and then fund it’s production through Kickstarter. The drawings are all done in graphite on paper and feature a range of interpretations of elements from the natural world, some with a surreal edge and others reminiscent of natural history studies.

The show will commence on November 27th at 6pm, and the pair will be releasing a hand embellished, limited edition print of their work "Root and Marrow". Below, alongside photographs of their gold leafing process, Chris and Zoe discuss their creative process, the art of collaboration, and some great advice for aspiring artists! 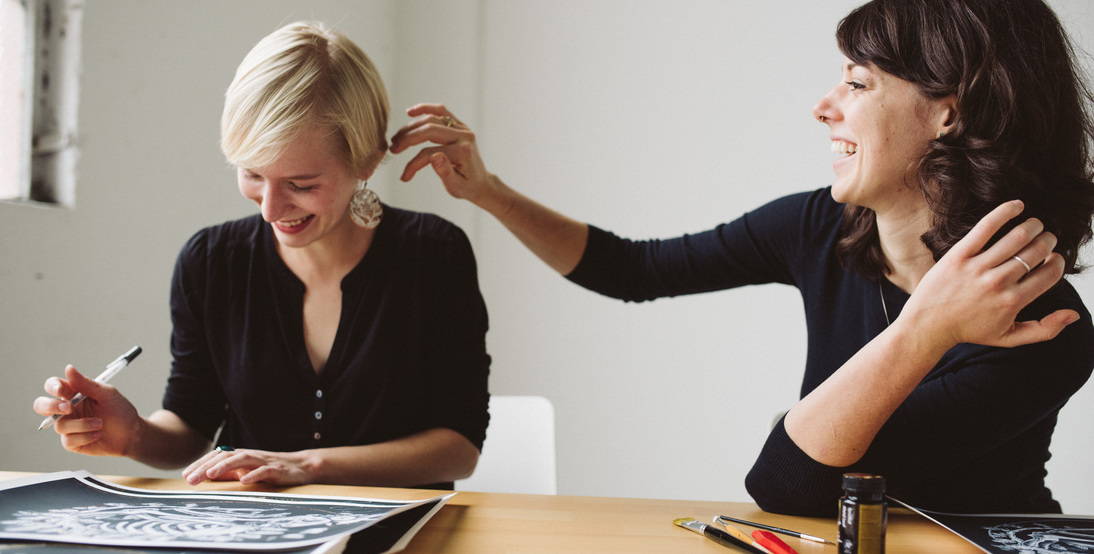 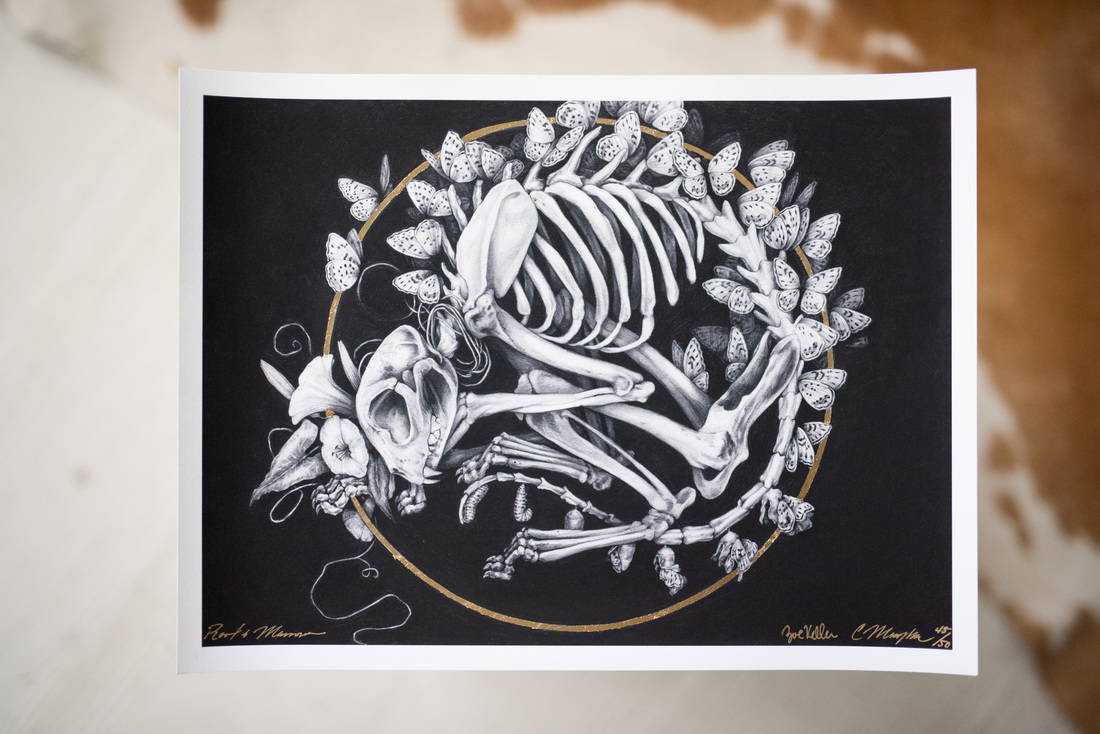 What inspires each of you to make art? Can you tell us a little bit about the influences and inspirations behind this particular body of work?

We share a similar interest in traditional scientific illustration and storytelling. For this project, we were influenced by the minutiae of the landscape that surrounded our studio, and by the experiences we each had on the Maine coast just before our moves to Michigan. There were many hours of close observation of mushrooms, feathers, and other bits of farm field flotsam and jetsam. Time was another important influence; living in the country and working only on that body of work for nine months gave us so much space to think, to heal emotionally through art making, and to consider the idea that the beauty of the natural world is valid enough subject matter to stand on its own.

What attracts each of you to collaborative projects? Is this something you hope to do more of in future either together or with other artists?

Coming into the project, Christina had done collaborative drawings and in these shared spaces found an appreciation for the vulnerability of working through ideas with other artists before they are fully formed; sharing a concept in its earliest stages opens up new avenues and can lead to the creation of something completely unexpected. Chris proposed the collaborative project, and Zoe was game to try something new.

C: Yes, definitely. I feel like in moving through previous projects, and this project, collaborationhas become a really important part of the art making process for me. The push back that I get from collaborators challenges me to think about things differently and try other people’s ideas on more fully. This way of processing then translates to other areas of my life. Through working on artistic collaboration I'm consistently being stretched to become a more complex thinker and thus a more empathetic human
Z: Down the line, for sure. Through Intricacies I found a mode of image making that I really truly enjoy and am proud of for the first time ever. Looking towards the coming year, I’m excited to celebrate this moment in my artistic life by making a body of work that is wholly mine. I’m also really stoked about the idea of collaboratingwith folks outside of the art world; visually translating natural processes and scientific concepts is really exciting to me, so I’m hoping to work closely with bird and bug and tree nerds in the near future. 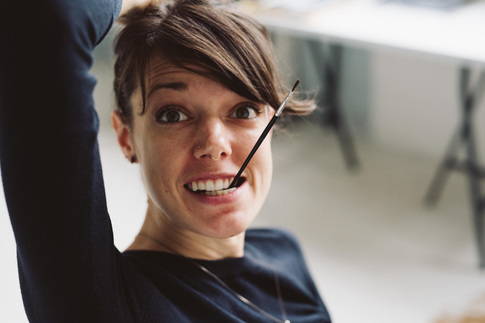 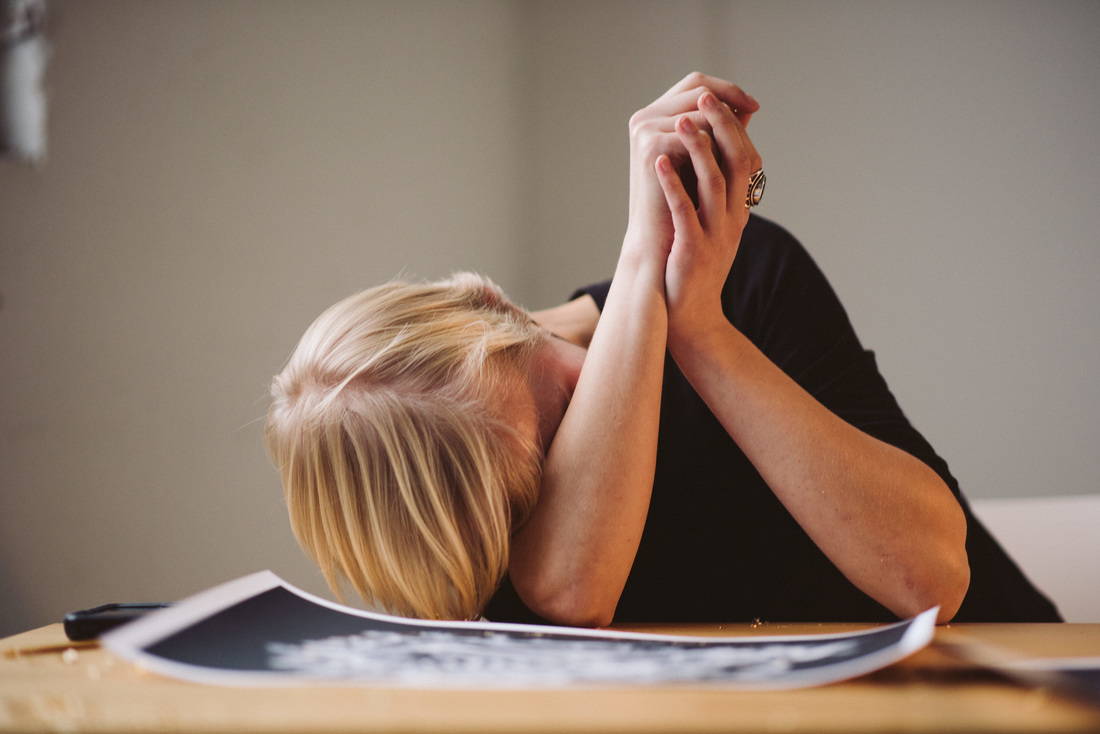 Can you describe the process of making a collaborative drawing? Were there occasions where you were at odds about whether a piece was finished?
The collaborative process was slightly different for each drawing. There was constant idea sharing because for that entire summer and fall we were rarely more than six feet from each other. Kind of literally. We could have been connected by a short length of rope and we would have still had slack.

Often the collaboration happened in the heady, pre-drawing conceptual phase. Sometimes we would physically pass a drawing back and forth between our two desks, at times with very specific direction about what we wanted the other person to draw, and at others as a totally open unfinished visual thought. We were almost always on the same page about when a piece was done, but Christina was better at carrying a drawing those last few feet over the finish line. Many of the drawings got their final pencil strokes on her desk.

Aside from the process of making the drawings there is a huge amount of background and administrative work involved with self-publishing a book. How did you delegate tasks and how did you find that experience? What were the most challenging tasks?
Over that summer we had to have a lot of business meetings, usually held on the “business bed” - this huge bed in our studio space that, side-note, we think was maybe haunted because everyone who slept on it had terrible nightmares. Anyway, we had timelines and to-do lists on a whiteboard and notecards and calendars, and learned over the months which tasks came easiest to each of us. We’re super lucky because we have really complimentary strengths. For example, Zoe is better at timelines and small task management, and Chris is better at keeping the big picture in focus and scheduling in completely necessary break time. Trust was so important here, because we both have a touch of the overachieving control freak thing, and in order to get everything done we had to let go of the reins at times. The thing that made that project so successful was that we were collaborating so intensely, but that was also what made it so hard. We spent almost every waking moment of every day for nine months within sight of each other. We shared a tiny bedroom with two twins pushed against opposite walls, our desks were in the same tiny loft, we shared every meal. And we happened to both be pretty broken hearted for a bunch of reasons that summer. So there were a lot of big emotions happening while we were trying to finish this big, risky feeling project. Luckily, kind of miraculously, we’ve come out the other side and we still like each other.
If you could offer one piece of advice to anyone about to embark on a similar project, what would it be?
Z: If a project feels really risky, that probably means that it’s worth doing. I was running away from a lot of stuff when I moved to Michigan. I was just so excited to be away from the east coast that I really hadn’t thought that much about the collaboration Chris proposed. I will always remember the first morning at the farm house, how far my stomach dropped when Chris started talking about this book we were going to make. It was terrifying in that moment and it was terrifying all the way through until the morning nine months later when the project got funded. Now I know to chase that terrified feeling.
C: If the project feels honest, go for it. Don’t make something just because it feels trendy and cool. And then be nice to yourself, because it is hard to put something out there that is truly honest. There will be a lot of uncertain moments throughout the process, and you have to just keep putting one foot in front of the other through those hard moments. Just trust that you and your honest work are valuable enough to share. 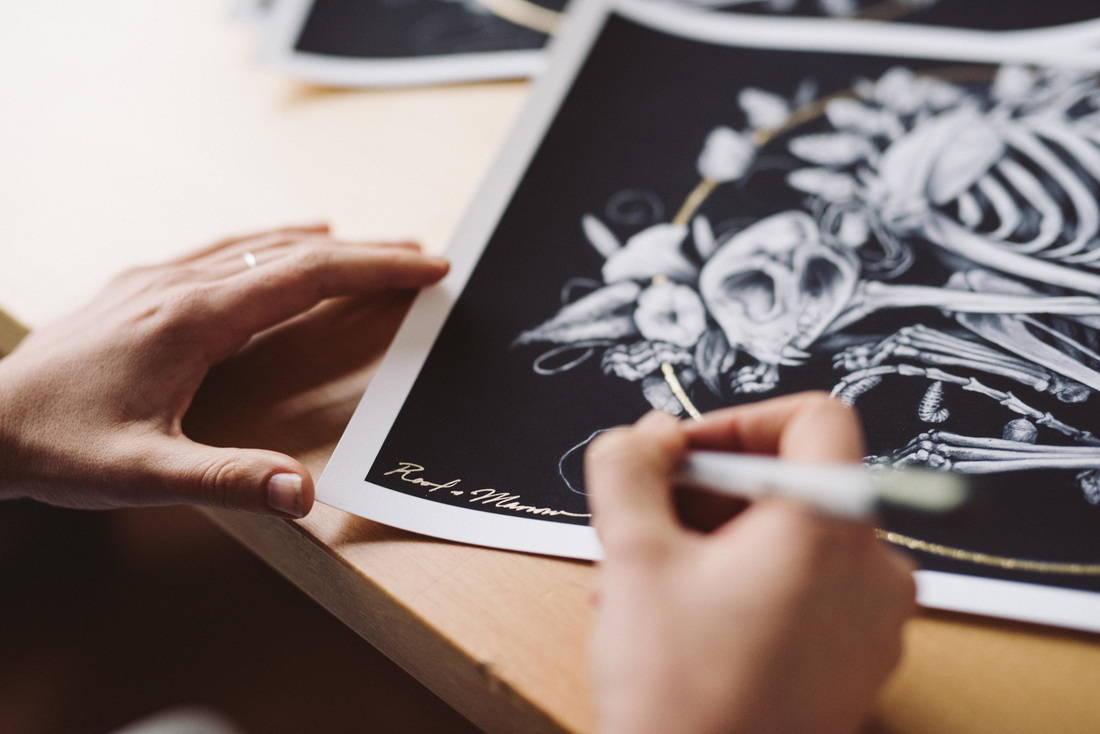