Scott Listfield opens his latest series of works this week, alongside a new body of work by Portland artist Brin Levinson, as part of a show entitled Anthropocene. We've been huge fans of Scott's work for a long time but this is his first feature show with Antler and we wanted to take the opportunity to give you some insight into his concepts and inspirations for the paintings.

The exhibition is an exploration of a term not as yet formally recognized by science, but which has been in common usage since the 1960’s. Anthropocene refers to a proposed epoch beginning at the point that human activity began negatively impacting the planet we inhabit. Scott's works for the show incorporate his trademark lone astronaut in urbanized landscapes with a focus on the natural world and the beings we've shared this planet with. There's also a return of his old favorite, the dinosaurs!

1. What do you love most about the place you live? How do you think it influences your work? (i.e., would you be a different artist if you’d grown up in another part of the country/world?)

Well, I live in Boston, but I'd say that one of the more pivotal events in my life was the time I spent living abroad, during and after college. I did a lot of traveling on my own, seeing things I never thought I'd see, and feeling far from home. When I reluctantly came back, I assumed the feeling of being from somewhere else, an alien if you will, would fade. Surprisingly, it didn't. It took me a long time to feel comfortable in my own country again, and it was during that time that the ideas for these paintings of astronauts first took hold. So I still live in Boston, and I like it here (other than the winters, which blow). But I'd say that my work was, and still is, inspired most by the feeling of being far from home in a place you don't know.

2. Can you tell us a little bit about the influences and inspirations behind this particular body of work?

So I've been working on this ongoing series of paintings featuring an astronaut for a while now. These works are definitely part of that series, although while I was working on them I spent a lot of time thinking about the type of work you show here at Antler Gallery. They tend to have a lot of animals in them. Which is cool! I like animals. And so I've been thinking about animals. Actually, Iv'e been thinking about animals for a while. I watch a lot of nature specials, and while I find them captivating, I also can't help but notice that there is pretty much no part of my life which overlaps with any animal more exotic than an occasional slug on the sidewalk. I mean, I have a dog. I hang out with her a lot. And I see squirrels on the regular. Maybe an occasional skunk, a raccoon, some random bird. But that's about it. My interaction with nature is pretty much exclusively through some kind of a video screen.
On the other hand, I find my phone to be an increasingly regular part of my day. For the first time in my life (or, you know, in all of human history) I have pretty much all the world's knowledge at my beck and call. That's awesome. And a little weird. I have little doubt that at some point in the not so distant future, small computers will become, in some way, part of our physical being. Look, I love my phone, but I'm not sure I'm super jazzed about that idea.
Anyhow, I'm no scientist, but it's feeling a lot like our generation will be the one to simultaneously witness a severe decline in the biodiversity of our planet, and also a serious increase on our reliance on technology in our day to day lives. None of that necessarily marks the end of the human race as we know it, but it's certainly given me pause. So I decided to make some paintings about it. Oh, and I also painted some dinosaurs. I really like dinosaurs.

3. Your work utilizes a finely honed skill to replicate the world around you but with an interloping observer in an astronaut suit. What message are you looking to impart through this tertiary view of a human-influenced earth.

For the most part I hope to let people looking at my work figure that out on their own, which I hope is the most annoyingly artsy fartsy thing I ever say. Seriously, though, I like painting an astronaut because it's fantastically blank – just a person in a reflective suit and a dark mask. All you can do is place yourself into his or her shoes (or moon boots) and take a look around. Which, I guess, is what I'm trying to get you to do. Take a look around the world you see in my paintings. Take a look around the world around you, maybe with a fresh pair of eyes. OK, maybe THAT was the most annoyingly artsy fartsy thing I'll ever say.

Do you consider your work documentation, social commentary, or something else?

Oh man, I just make paintings of astronauts. I'll leave it up to you to decide if there's anything else going on there. 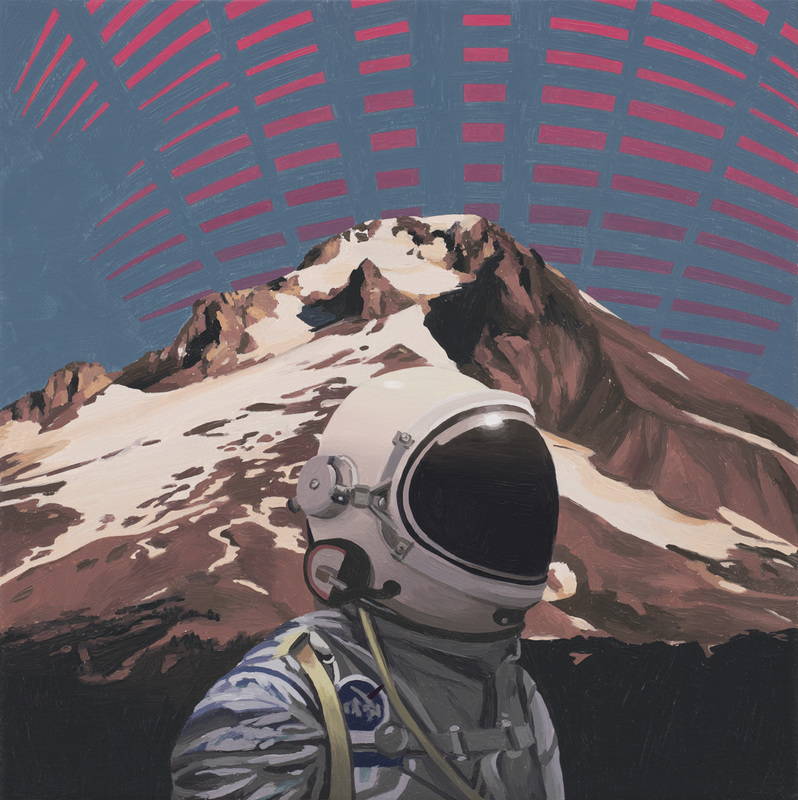 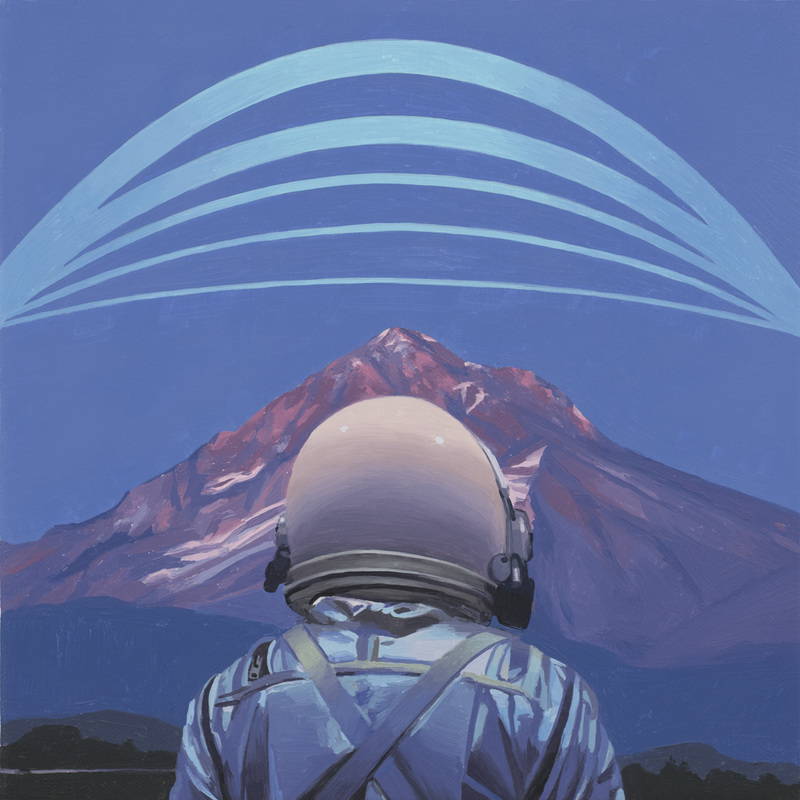 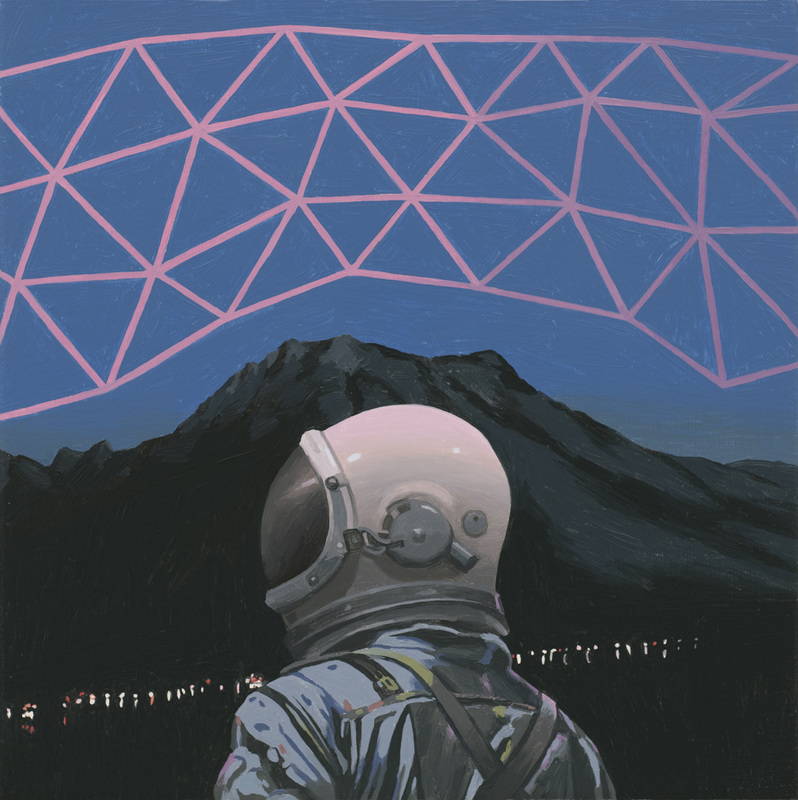 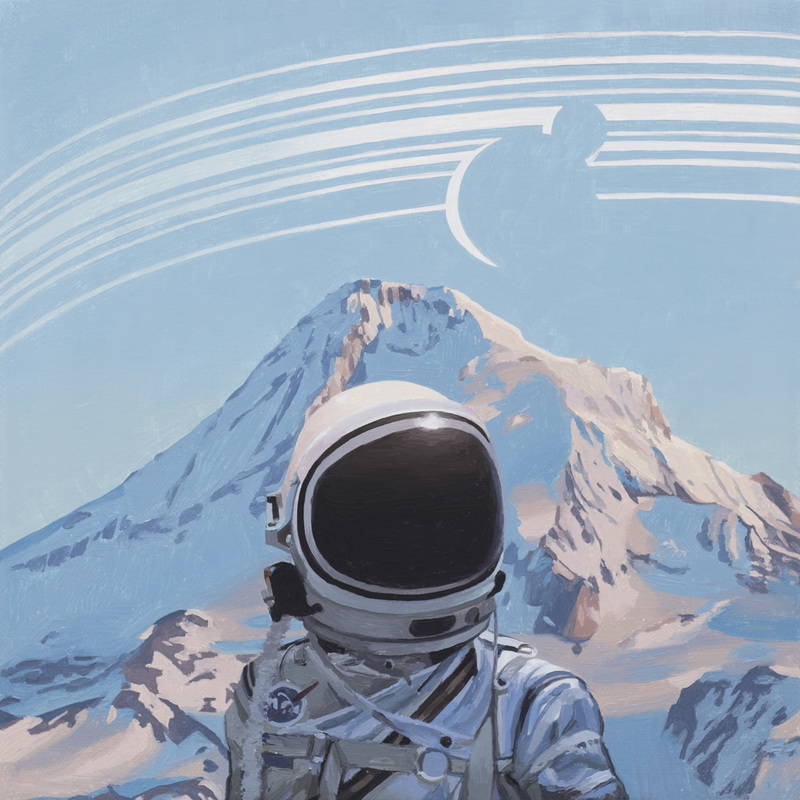 4. Your focus is often contemporary but there is a definite sense of time being warped. Does your narrative relate to a specific/imagined time period?

When I was growing up, watching cartoons and firing small plastic fists at things, the future was always the 21st century. It seemed pretty inevitable, according to the 70's and 80's sci-fi I grew up on, that we'd be riding around in flying cars and taking short jaunts to the moon with our robot pals by now. But now that we're here, our concepts of the future and of the present are being continually and weirdly influenced by what we THOUGHT the 21st century was going to look like. I mean, Nike is, right now, making self cleaning Marty McFly sneakers. There are hover boards (although they seem to suck). Apple went all Dick Tracy and put a phone in a watch. For a little while people tried to make wearing silver pants a thing. We've got self driving cars and drones with cameras and I'm sure there are people somewhere trying to build every single thing that ever happened on Star Trek. It's enough to make me wonder if we're living in the present, the future, or just some vague approximation of Back to The Future II.

Whenever I start to think about this, it all starts to meld together. It's impossible to think about the future without mixing in all the ideas and expectations we have for the future. And it's increasingly hard to look at the present without wondering the same thing. That's why I try to keep my paintings deliberately vague about time. Neil Degrasse Tyson, who's infinitely smarter than me, once tweeted: “Apollo in 1969. Shuttle in 1981. Nothing in 2011. Our space program would look awesome to anyone living backwards thru time.” Preach, Neil.

5. How do you imagine your work will change over the coming decades? Do you have any specific areas you want to move into or goals you wish to achieve?

Nah, I'm pretty sure I'm peaking right now, and it's all down hill from here. Besides, goals are kind of arbitrary in the art world. I can say “I'm going to show in the MOMA someday!” but unless I get famous and then die in a notable way, that's probably not happening. I enjoy making paintings of astronauts. It's still wonderfully surprising to me that there are people out there who like what I'm doing. As long as those people don't totally ditch me, I'm happy to continue doing what I'm doing.

6. Do you listen to/watch any form of media while working? If so, what is it and how does it influence your process?

7. As supreme leader of the totalitarian regime ruling over a Listfieldian utopia which artist/art movement would you censor and/or exile and why?

Oh god. Count me out of any regimes or utopias. They all start out with good intentions.. Oh wait, no they don't. They're usually like “We're better than those people over there. Let's prove it.” Next thing you know, you're living in Stalinist Russia, or that town from Footloose. No thanks.

8. Conversely, whom would you commission to design your visual art propaganda?

9. Speaking of dystopian realities, your show is possibly opening on the eve of one. The world and, therefore our collective future, will be fundamentally changed in the time between your show opening and closing. Without the knowledge of which reality we will be entering, what is your view on the world to come? Are you optimistic or pessimistic and why?

I've somehow managed to live my life as both an optimist and a cynic. I believe the worst in people. But I also have faith we'll figure it all out somehow. Not gonna lie though, the past few months have been giving me an ulcer. I think we're going to do the right thing. But I might just pack all my belongings onto a raft anyways, just in case.

10. As our final question we usually ask “deep sea or outer space”, but that seems a bit redundant in this case, so....time travel: would you choose to explore the past or the future?

Oh, definitely the future. I don't really get people who want to go to the past. I mean, you already know what's going to happen, right? And let's say you go back to the American Revolution. Is that really going to be better than watching a half assed documentary on the History Channel? You're stuck in one spot, and there's going to be a lot of smoke and muskets and dying people. And you're stuck in 1776 where no one has indoor plumbing and pants are made out of rope and pewter and smallpox is a thing. I'm not in the least bit interested in abandoning the comforts of my own time. Even the thought of going back before there were maps on my phone makes me slightly queasy.

So I'd definitely go to the future, but I'd be wary of going more than maybe 25 years ahead. If you're old enough, think about what 2016 would do to your 1991 brain. The internet didn't exist yet! No one had heard of Nirvana! Donald Trump was just a guy who failed at owning a casino! If your 1991 self popped into existence right now they'd just barely be able to walk down the street without crapping themselves. I don't want to push that boundary too far. 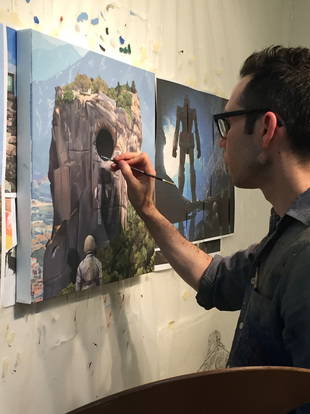 (Scott Listfield in the studio above)